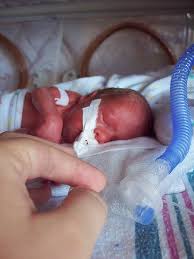 Researchers in the pediatrice ICU at Children's Mercy Hospital found that holding infants intubeded for acute respiratory failure was well tolerated and save, with no unplanned extubations and no changes in vital signs.

New research published in Critical Care Nure finds holding intubated infants in the PICU was well tolerated, without an increase in adverse events.

Newswise — Critically ill infants who are old enough to move on their own but too young to cooperate with care instructions have been among the last to benefit from patient mobility initiatives. Results from a holding intervention in the pediatric intensive care unit (PICU) at Children’s Mercy Hospital, Kansas City, Missouri, may help change that.

Concerns for patient safety and medical device removal, lack of resources and disagreement about when patients are sufficiently stable are among the barriers to mobility interventions in the PICU, especially for infants.

The researchers addressed many of these barriers as part of a study of a holding intervention of infants intubated for acute respiratory failure. They found that holding intubated infants was well tolerated and safe, with no unplanned extubations and no changes in vital signs in 158 holding episodes. The study, “Early Mobilization of Infants Intubated for Acute Respiratory Failure,” is published in the December issue of Critical Care Nurse (CCN).

Co-author Laura Ortmann, MD, conducted the study during her residency at Children’s Mercy. She is now an assistant professor of pediatrics at Children’s Hospital and Medical Center Omaha in Nebraska.

“By the time we completed the 16-month study, the practice of holding infants in the PICU was no longer a rare occurrence and had expanded to a wide variety of other critically ill infants, including newborns recovering from surgical procedures for complex congenital heart disease,” she said.

Although the effects on parents were not directly examined in this study, nurses reported that the biggest impact appeared to be on the parents’ moods, which led nurses to encourage holding by parents beyond the study protocol.

Early mobility has been increasingly integrated into the care of critically ill patients from neonatal preterm infants to adults, but it’s been slower to gain acceptance for the youngest PICU patients. Infants intubated in the PICU do not have access to their normal calming mechanisms and frequently require sedation to treat agitation and prevent extubation.

In the study, patients were screened daily to identify infants intubated for acute respiratory failure secondary to either viral or bacterial lower respiratory tract disease with an expected duration of mechanical ventilation of greater than 48 hours. Parents/guardians of eligible infants were approached for consent. The enrolled patients were then assessed daily to ensure they met 10 different criteria related to their individual health, including defined levels of inspired oxygen, inspiratory pressure and sedative dosage.

On days each patient met intervention criteria, the goal was for the infant to be held a minimum of two times for at least one hour each, but there was no limit to the number of times per day or length of time the infant could be held. The holder could be any family member designated by the parents, or a nursing or research staff member if a family member was not available.

Infants were frequently held more often and for longer than the minimums stated in the protocol, with half of the sessions lasting over 90 minutes. Vital signs were not different when the infants were being held, showing that the stimulation of being moved and held was physiologically well tolerated.

During the study period, 23 infants were held a total of 158 times. Enrolled infants were eligible for holding on 54% of ventilator days, and the goal of holding infants a minimum of two times on eligible days was accomplished 64% of the time.

The results were compared with the medical records from a historical control group matched by age and other measures. There were no differences between the control and intervention groups in duration of intubation, length of stay in the PICU or overall length of hospital stay. Sedative use was significantly different between the two groups, but this likely has more to do with changes in sedation practices than with the holding intervention.

The study was limited by a small sample size of infants intubated for primary respiratory failure. The researchers call for further studies that focus on both infant and parental outcomes and that assess higher-acuity patient populations.

As the American Association of Critical-Care Nurses’ bimonthly clinical practice journal for high-acuity and critical care nurses, CCN is a trusted source of information related to the bedside care of critically and acutely ill patients.