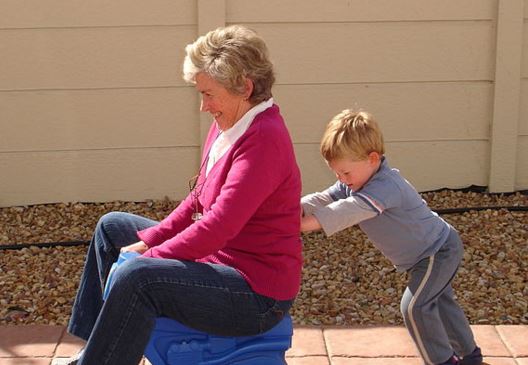 Newswise — ST. LOUIS -- Note to Mimi, Didi, Gigi, G-Ma and the rest of the gang who have swapped out your own pet names for Grandma: Being a grandparent is good for your health. So says Angela Sanford, M.D., assistant professor of geriatrics at Saint Louis University.

“You can’t be unhappy around little kids. They’re mood lifters,” says the SLUCare geriatrician and mother of three children, ages 1, 2 and 3.

“Little ones typically adore and look up to their grandparents, which is great for your sense of self-worth and self-esteem. By spending time with them, you know you’re helping them to become better people, which in turn helps you feel like you’re making a huge contribution to the world.”

As boomers become grandparents, they’re redefining the role the same way they’ve redefined their roles since they were young. They’re embracing their change in family status with the type of enthusiasm they demonstrate when the next generation of the iPhone comes out, except amplified exponentially to the levels of a Led Zeppelin concert.

And the good news is beyond the feel-good Hallmark moments that abound in simply being a grandparent, specific activities most grandparents enjoy with their grandchildren are actually good for them.

Physical play: When you are active with your grandchild – playing tag, pushing a swing, walking around the zoo or wrestling on the living room floor – you are exercising, which is a key contributor to good health, Sanford says.

“Exercise reduces your risk of falling, which is a really big deal. About 20 percent of the time falls cause serious injuries like broken bones that can undermine your ability to function independently,” she says.

“You also tend not to focus on your aches and pains if you are active. But beyond the physical strength, agility and balance that you gain by being active, exercise improves your mood and is important for brain health. It gets the blood pumping to your brain and can prevent or slow the progression of dementia.”

Cooking: Generally you eat healthier when you cook because you may be more likely to prepare whole foods (those located around the perimeter of a supermarket) instead of turning to quick, ready-to-eat processed foods. Measuring ingredients, stirring, chopping and pouring strengthen a variety of fine motor skills, which helps with arthritis or tremors, Sanford says.

Sharing your own grandmother’s recipes with your grandchildren passes along a family legacy, and frequently the stories and family lore that go with it. This reminiscence strengthens cognition and is good for memory.

But perhaps the most important part of cooking is what follows –- eating, Sanford says, because malnutrition in older adults is a huge problem.

“A lot of older people simply don’t eat because they don’t have anyone to eat with,” Sanford says. “Enjoying a meal is a social activity, and sharing food and conversation makes eating a pleasant experience that we anticipate rather than something we have to do simply to survive.”

Playing games and putting together puzzles: Games – cards, chess, matching, “I Spy,” trivia and video games – not only are fun, they’re also good for your memory, may stimulate visual-spatial skills and make you think in other ways – all great exercises for brain health.

“Depending on what is involved with the game or if you add conversation to the mix, you improve your ability to multi-task, which can decline with aging,” Sanford says.

Being generally busy: Let’s face it, kids get bored easily, so most grandparents mix it up when they’re spending time with a grandchild. They might read a book, listen to music, prepare a snack together, go on a walk, build a fort, play tag, watch a TV show and put together a puzzle. Tiring? Maybe, but it beats the alternative.

“Activity triggers a whole cycle of well-being,” Sanford says. “It helps you eat, sleep and even digest food better -– which are problems many older adults have. And when you’re busy, you’re not sitting in a chair, thinking about the arthritis in your knees. You’re up and moving and sometimes you forget about the pain. Your whole body feels like it is working better.”

Taking a nap: OK, you’ve got legitimate permission not to feel lazy when you join the young and restless by catching a few Z’s at naptime.

“A short power nap of about 20 minutes can make you feel more alert and give you the extra energy to enjoy your day,” Sanford says. “Many executives close their doors for a little snooze to regenerate. The key is to not let yourself sleep for so long that you are too rested to go to bed at night.”

Staying flexible: You had planned to go to the library, but your granddaughter would rather dig for worms in the backyard. You had all of the ingredients to bake chocolate chip cookies, but your grandsonhad his heart set on walking to the ice cream store instead. Sometimes you scuttle your plans, shift gears and move onto something else, which prepares you to be more flexible and resilient.

That practice can serve you well whether you are dealing with a significant change, such as the loss of a loved one, or something much smaller, like your favorite waitress not working when you show up at a restaurant for dinner.

“With kids, you have to go with the flow and be adaptable. It’s never about you and is always about them,” Sanford says. “But it’s great to have that variety of experiences, and being flexible is good for you. It helps you handle life’s highs and lows much better, so when things go wrong, you’re better able to adapt.”

Saying prayers: When we pray, we stop and reflect on our blessings, which shifts our perspective from what we don’t have to what we do. Prayer and meditation helps us cope better with adversity. In addition, the act of slowing down to contemplate something bigger than ourselves is relaxing – slowing the heart rate, dropping blood pressure and making our breathing more constant – which can bring a feeling of peaceful tranquility.

“When my children’s great grandfather, who is 90, visits every week, he prays with the kids,” Sanford says. “In addition to doing something that is meaningful for him and good for his health, he’s passing on to that generation the comfort that a religious belief can bring, a source of strength in times of trouble. When he talks to them about prayer, he feels as though he is doing his job in passing along important values.”

For many grandparents, caring for their grandchildren offers the pleasures of being a parent without the pain. It reminds them of what they loved about a wonderful time of their life, when they were raising children, without having to be a disciplinarian or do other difficult jobs that come with parenting.

For others, being a grandparent gives them a chance to be more involved than they were with their own kids, especially if they were the breadwinner. And, of course, there is an endpoint. Typically, grandchildren go home.

“Being a grandparent turns your focus outward. If you’re taking care of a little one, there’s no time for a pity party,” Sanford says.

“But perhaps most important, being a grandparent lets you leave a legacy. Most of us aren’t going to be famous. But if you can make an imprint on those closest to us, when you’ve touched those around you in a profound way, that is what counts.”